Mineral-insulated copper-clad cable is a variety of electrical cable made from copper conductors inside a copper sheath, insulated by inorganic magnesium oxide powder. The name is often abbreviated to MICC or MI cable, and colloquially known as pyro. A similar product sheathed with metals other than copper is called mineral insulated metal sheathed (MIMS) cable.

Pyrosales works with Mineral Insulated Cable Co., Ltd. to supply MICC wiring cable systems. The main function of MICC cable is to ensure during a fire that all the building emergency and essential circuits such as escape lighting, fire sensors, fire alarm circuits, service lifts, water pumps, smoke extractors continue to function both during the building evacuation and the firefighting efforts. 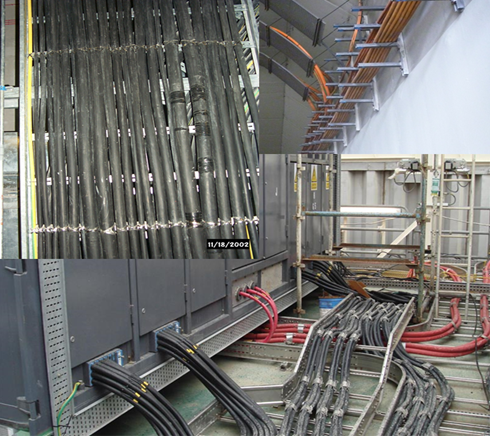 It is the performance of the mineral insulated fire proof wiring cable which can provide this essential function.

The plastic cables which are halogen-free, most cable makers most often choose polymers like polyethylene (PE & XLPE) because it is easy to process and cheap, however, although polyethylene is halogen-free it has a naturally high fire load and thus likely to propagate flame. Secondly, materials like Polyethylene are commonly used as they are halogen-free. However, burning Polyethylene will produce large amounts of Carbon Monoxide. Carbon monoxide is often claimed to be statistically responsible for most toxicity deaths in fires.

Plastic cable can overload due to short circuits or damage from falling objects bring further large amounts of smoke and toxic gases. As outlined in the NES713 standards, HCL toxicity levels 500ppm can cause fatalities. In addition, HCL corrodes expensive computer networks and equipment. Even low smoke halogen-free (LSHZ) cabling, after a number of fire research institute investigations, show it is not much better than traditional cable.

The mineral insulated fireproof wiring cable which has been developed by experts in MICC is an inorganic materials in the construction of the cable eliminates the production of smoke and poison gas during a fire.  It also provides for an extremely mechanically strong cable which can withstand falling objects and water spray. In the environment which is full of heavy acrid smoke MICC fireproof wiring cable increases and enhances the chances that people will escape safely. It is suitable for underground constructions such as road tunnels, vehicle parking and cable tunnels. It is also highly recommended and in some cases covered by local or national standards for installation in train stations, airports, docks, theaters and other high occupancy locations such as public buildings, art galleries and museums.

MICC mineral insulated (MI) cable is composed of inorganic material namely a copper conductor or conductors, mineral insulation-magnesium oxide (MgO) and the copper sheath. As stated in the IES228 standard, the melting point of the copper conductor and sheath is 1083 degrees Celsius. The melting point of the high purity MgO is 2800 degrees is Celsius. Mi cable will continue to function reliably in an environmental temperature up to 1000 degrees Celsius. This is the unique ability of MI wiring cable over that of the traditional wiring cable. There are different ways to manufacture Mineral Insulated cable. MICC use the Seamless tube technique as opposed to a welded tube, to ensure a totally flawless cable. The purpose of MI Cable is to act as the most durable cable on the planet for mission-critical applications. Seamless tube MICC cables have no inconsistency in the metallurgic structure of the tube and no risk of introduced contaminants as there is no welding. Thus for these mission-critical applications, MICC seamless tube cables provide optimal lifetime security.

For some special applications (installations in concert or to the colour scheme of a building) we can serve the outer of the MI cable with an LSF sheath to your colour requirements.

MICC MI cable is a standalone product, the product contains no polymer, uses no zinc, and does not require conduit protection. It is unaffected by the issues associated with cable-in-conduit systems and there have been no changes to the product that has consistently met the requirements for a two-hour fire resistive system when tested to UL2196 and ULC-S139 standards. The test UL2196 is consider by far the most realistic fire cable test in the world and is much more rigorous than any other test. The temperature is higher at 1020 deg C, the test is at full scale and required 5 samples both vertically and horizontal, water spray is with a firemen’s hose.

The characteristics of the MICC cable:

Fireproof: Mi cable will not burn, or support combustion.  By continuing to function when exposed to fire, it maintains vital emergency services.  The inorganic bare cable will not emit smoke, toxic gas propagate flame.

Wiring ad Cable and Conduit Combined: The cable sheath provides an excellent earthing medium and core protection, yet the overall diameter is smaller than other types of cables with equivalent current ratings and it is sufficiently pliable to permit intricate routing.

Pliable: MICC MI cable is fully annealed and consequently extremely malleable, enabling it to be easily bent to follow intricate shapes without detriment to its electrical characteristics.

Inherent Flameproof Barrier:  MICC MI cable has a solid construction with a non-flammable sheath.  The highly compacted insulation will resist the transmission of vapours, gases or flames between items of equipment connected by the cable.

The cable also withstands considerable abuse such as bending, flattening and twisting, without electrical failure.  It is also resistant to rodent attack.

Non-Ageing: MICC MI cable is permanent and will not degrade with age as its sheath, conductors and insulation are for all practical purpose indestructible and completely stable. Hence the cable can be removed and re-used many years after initial installation, with subsequent savings in re-wiring cost.

High Corrosion Resistance: MICC MI cable, with its copper sheath, has a resistance to corrosion and for all normal environments need no additional protection. Where it may be exposed to chemicals specifically corrosive to copper, cables with an LSF protective outer covering are available.

Waterproof:  MICC MI Cable has a metal sheath which is impervious to water and gas.

MICC MI Cables are eminently suitable for installation in nuclear radiation environments because of their inorganic construction.

Zero Energy: Bare cable will not contribute to the energy of a fire.  A thin LSF outer covering offers minimal fuel to a fire station.

MI With Small Overall Diameter: MICC MI cable have much smaller diameter than other types of cables with equivalent current ratings.  This ensures a neat installation with no deep chasing in walls.  A thin layer of plaster can accommodate the cable or it can be run inconspicuously on the surface.

High Operating Temperature: Bare cooper sheath MICC MI Cables withstand continuous operating temperature up to 25 degrees Celsius, although the cable can be operated for periods up to temperatures approaching the melting point of copper (1083 degrees Celsius).

Competitive Installed Cost: MICC Cable eliminates the cost and potential structural damage caused by repair and replacement work associated with other cable types.  It also prevents the disruption to business operations through the need for building closure to allow such work to take place.

High Degree of Electrical Screening: The solid copper sheath of MICC MI Cables provide an excellent electrostatic screen. In addition, it also maximises electromagnetic compatibility (EMC), enabling the cable to be installed with minimum separation from other cables.  For specialised data communication applications, cable with twisted conductors are also available.

Pyrosales also sells the tools and accessories for installation of the Mi cable. Please contact us for any technical datasheets or information