What is a Thermocouple & how do they work? 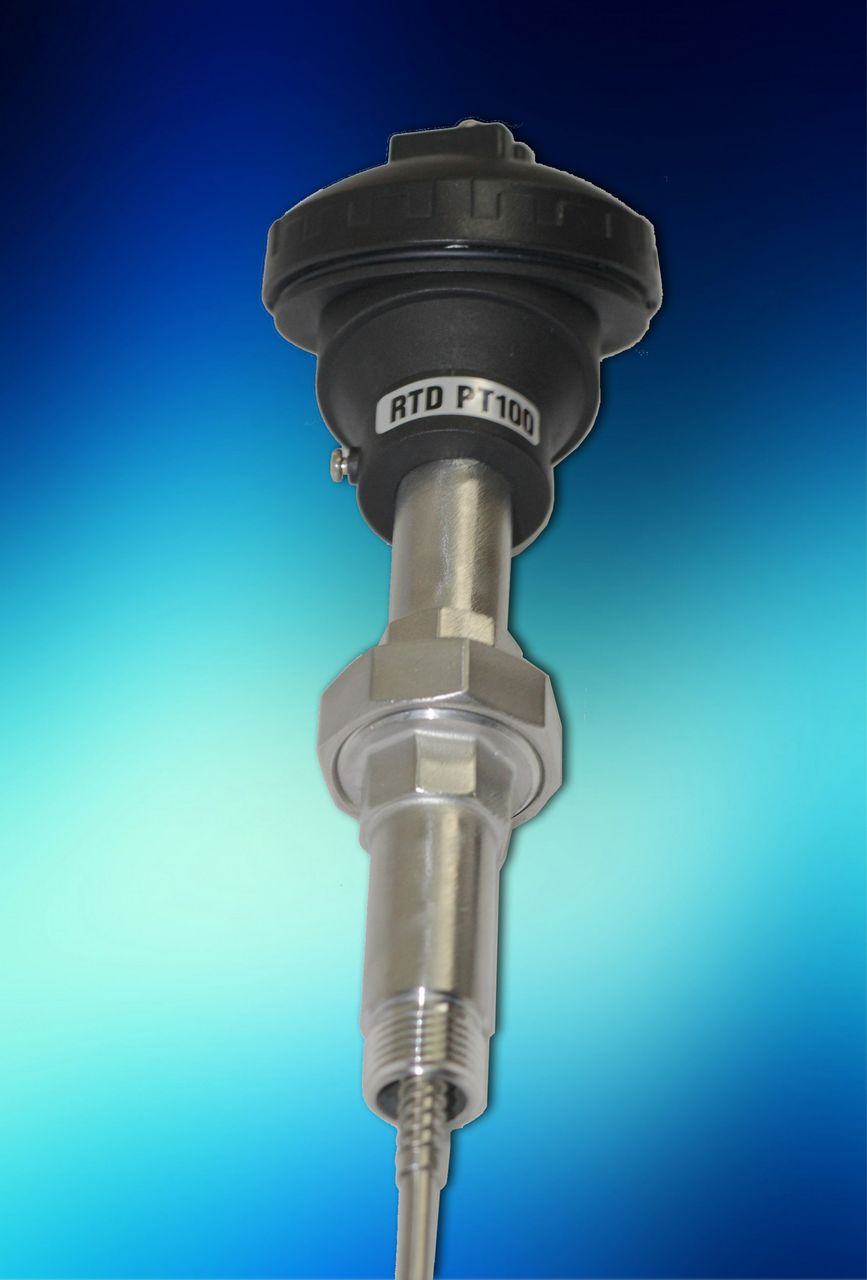 A thermocouple is a pair of dissimilar metals joined at one end and elsewhere isolated electrically from each other. It produces a small electrical signal that can be used to monitor temperature. A popular notion is that the EMF (Electric and Magnetic Fields) is generated at the tip or hot end of the thermocouple at the junction between the two metals. This notion is completely incorrect. The EFM is not localised to the tip but is dispersed throughout the lengths of each leg. The total EMF generated in a thermocouple is the difference between the EMF’s in both legs. This is due to the Seebeck coefficient of the metal or alloy used. (Seebeck Effect is a phenomenon in which a temperature difference between two dissimilar electrical conductors or semiconductors produces a voltage difference between the two substances. This can be applied to thermal-to-electrical energy conversion. The Seebeck effect was discovered in 1821 by Thomas Seebeck). This coefficient is a measure of how the electrons are coupled to the environment, to the metal lattice, and, on a larger scale, to the grain structure.

What is a Thermocouple Junction?

The choice of the hot junction will be dependent upon the response of the thermocouple, contamination hazards, physical restraints, and electrical earthing considerations. 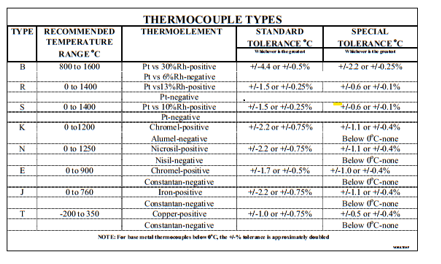 Rare Metal Thermocouples
These are often designated as “ Noble Metal “ thermocouples and are generally designated to
thermocouples with conductors made from platinum and/or platinum alloys. They consist mainly of the type B, R & S, and are typically used for high-temperature applications above 1200oC.

Useful thermocouple life is a very difficult prediction to make, even when most of the details of an application are known. And unfortunately, such information is often very hard to determine. The very best test for any application is to install the unit, use, and evaluate the in-use performance of a design that is thought likely to succeed. The recommendations, and non-recommendations, listed under the thermocouple type descriptions are a good place to start when first selecting an assembly style to install in a process.

All thermocouples are subject to calibration drift with use, it is just a matter of how much, and how fast this may happen. Thermocouple performance is critically dependent upon absolute uniformity of both physical and chemical properties along the entire length of the circuit. When thermoelement materials are produced, careful steps are taken to assure that this uniformity (or homogeneity) is achieved. In use, different parts of the circuit experience different conditions of heat, chemical exposure, etc., and as a result, such parts do change in physical structure and composition from the original thermoelement wire.

Because the thermoelectric emf resulting from a given temperature difference is sensitive to changes in the chemical and metallurgical properties of the wire, the total emf produced by a used probe can be different from an otherwise identical new one under the same conditions. The changes are usually small (often negligibly small) over appreciable periods of time. But under adverse conditions, it is possible to realize large drifts at rapid rates.

To achieve long and reliable thermocouple life, the usual strategy is to operate the device comfortably under its maximum temperature and provide it with the cleanest possible environment in which to work. Enclosures, such as sheaths, protecting tubes, and thermowells, are the usual means of controlling the conditions that surround the thermoelements themselves.

What can go wrong

Protecting tubes, sheaths, and even thermowells, can fail due to corrosion or mechanical damage. Processes can go over temperature and exposure

thermoelements to higher than anticipated temperatures. If a sensor controlling a process drifts low in its output, the process, in response to its controller, may as a result be forced to temperatures higher than intended. Base metal assemblies are vulnerable to attack by a few chemical agents. They can also be altered by unfavourable operating conditions. As supplied, noble metal thermocouple wire of good quality has very low impurity levels. Consequently, it is susceptible to the contamination that can affect its thermoelectric properties. Platinum is especially sensitive to the presence of free silicon, with which it can combine to form a eutectic alloy that will melt at or below normal service temperatures. High-purity insulators and protecting tubes for precious metal assemblies as well as careful attention to cleanliness in handling, are therefore essential to help prevent this occurring.

Human error can be a contributing factor as well. Controls may be improperly set, connections may be improperly made, and inappropriate action in response to the operating conditions may be taken by mistake. Redundancy in instrumentation combined with training and responsibility are the usual means to combat these kinds of errors.

To assess the problem, check if the system performance seems to be reasonable for the conditions: Do changes in the controls produce a logical result? What about the product? Does its condition correspond with what the instruments are saying?

How to test a used thermocouple

Firstly, it is not always practical to remove a suspect thermocouple from service and ‘test’ it in another place. Once the device is used means that it may no longer be homogeneous. Subjecting an inhomogeneous thermocouple to a different set of temperature gradients, even if only subtly different, can result in different output and reading. Recalibrating a used thermocouple will certainly yield a ‘number’, but that number will probably be meaningless in the thermocouple’s place of use.

The best way to evaluate a used thermocouple is to ‘probe’ the location by placing a new thermocouple that has a known output, alongside the suspect one in an operating process, and compare the readings. If it is not practical to have two sensors in place at the same time. Remove the suspect probe and replace it with another one known to be good. Then, if the good probe is in the same place as the removed one has been, and the process has not changed during the exchange, the readings from the two probes can be compared.

Note that it is not necessary to keep and use an unlimited supply of new probes for these tests. A few suitable replacement devices can be kept available, selecting one for testing use. Under normal circumstances, thermocouple drift, or degradation, is a gradual and very slow process. A single replacement probe can therefore be used several times to probe a process and be considered reliable for several repeated tests. And, when a drifted probe has been found, the test probe may simply be left in place as a working sensor, while the next replacement becomes the test device. 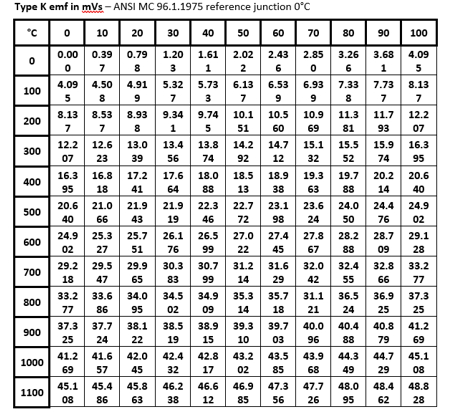 A useful instrument for troubleshooting thermocouple systems is a portable temperature indicator. A number of these devices can operate with two or more different thermocouple types, and some offer an ‘output’ function that will produce an electrical output to simulate a thermocouple operating at any temperature of choice.

In use, the instrument is normally attached to the wires of a circuit being tested at some convenient access point, such as in a connecting head. Care should be taken to ensure that the correct polarity is maintained. In Australia, we use the ANSI colour code where the negative is always RED. There, the output of an operating sensor may be monitored and evaluated. Or, using an instrument’s ‘output’ function, a simulated thermocouple signal may be sent back to the circuit’s permanent indicator or controller to verify the proper operation of the rest of the circuit. When driving a signal back towards an instrument, it is usually necessary to break one side of the circuit to avoid ‘loading’ the portable tester by the low resistance of the thermocouple itself.

Sections of extension wiring in thermocouple circuits can also be checked for proper connections with a portable tester. The section being tested should be electrically isolated from the rest of the loop, and one end of an extension wire pair should be shorted together. If a tester is connected to the opposite end of the shorted pair, the tester should indicate the approximate temperature of the shorted end. Note that if both ends of the extension pair happen to be at the same temperature, it may be necessary to warm the shorted end a little and verify that the tester ‘sees’ the temperature change correctly. The possibility of an incorrect, reversed connection is being checked in this test.

Pyrosales engineers are available to consult on various stages of any project, from the development and planning of a new project to modifying or upgrading an existing facility. Our staff is here to provide you with assistance and recommendations to ensure the best outcome and value. We are happy to visit our clients on-site or conduct meetings from one of our offices.

Pyrosales Pty Ltd has been assessed and approved by QAS International Ltd to ensure we adhere to quality management systems, standards, and guidelines. We continue to hold this certification by maintaining our work and quality practices: ISO 9001 Certificate Number A1066AUS 1066AU 20-21