The Case for MICC Cables

Pyrosales supplies MICC Ltd mineral insulated cables with copper or special metal alloys capable of meeting all known fire, flame and oven tests. There is a guaranteed fire proof wiring system which is also 100% flame retardant, 100% halogen free, 100% smoke free, 100% toxic emission free with zero organic content thus with no fuel element, no heat of combustion, no oxygen depletion and no contribution to temperature rise. No other cable design today can guarantee this, or provide the same level of overall fire safety and integrity security throughout the life of the building.

In addition, MICC cables are both water and oil proof, have a greater current ratings and have smaller diameters compared to other cable designs. They require no conduit for mechanical, vermin or insect protection, need fewer fittings, are 100% UV, Ozone and sunlight resistant as well as radiation resistant, are non-ageing, will operate in cryogenic environments and are mechanically stronger than any other cable design in all operating or emergency conditions.

The first cable to ever be deemed as a fire survival cable was mineral insulated and was patented by Arnold Francois Borel in 1896. Societe Alsacienne de Construction Mechaniques was the company that worked on and grew the product. A well known Manufacturer then bought the patent rights in 1937 and started mass production.

These cables do require a different installation method using different tools and fittings to ensure that cables are terminated correctly and to guarantee that humidity exposure has not affected its insulation resistance. The larger cables were tough and took longer than normal to install. This brought upon a need in the market for a more ‘flexible’ option which could be set up in the same way a regular plastic cable would be installed, with the added benefit of being ‘flame-proof’.

Following this new consumer need, the first cable construction used copper conductors which were protected with silicone rubber and shielded with a glass braid. Through vigorous testing, it proved to be able to withstand fires for up to 3 hours. The disadvantage of this design was that, as the remaining silicone rubber ash (which was left after the early ruin in the flame) was not structurally sturdy, there was a possibility that the larger cables could rout the ash, which then resulted in a crash.

During the 70’s, cable manufacturers were constantly working to develop more innovative cables, in the hope of creating a higher fire survival construction.

The basic testing methods which were created in 1970, are still being used today as a universal method for fire resistant cables. These methods are IEC331:1970/IEC60331:2009 and BS6387CWZ.This British Standard method allowed test temperatures to increase from the general 750°C to 950°C (Test C), as well as including a further (Test Z), which was a 15 minute fire with a mechanical shock, and a (Test W), which was a 15 minute fire with a water spray that simulated a fire sprinkler. More recently (2016) the MICC Fire Survival Cable was rigorously tested at CSIRO in Australia (The Commonwealth Scientific and Industrial Research Organisation). The results of the test concluded that all MICC cable variations are approved for use as per ASNZS3013 52W, as well as a fully tested, fire-rated joint. This is the only fire survival cable that has passed this testing process.

Since the invention of the fire survival cables and the testing methods, there have been many additions/changes to these test methods. The most recent one to date is:

These test methods have been specifically developed for electrical cables only. On the contrary, where fire survival is being used for structures in buildings, fire doors/windows, fire floors and walls etc., the test methods follows a different type of check which is known as The Standard Time Temperature Curve (ISO 834-1), and is a full scale practice.

The curve has become the standard measurement scale of fire severity. The standards state that testing elements need to be presented with true conditions to accurately show its survival abilities. 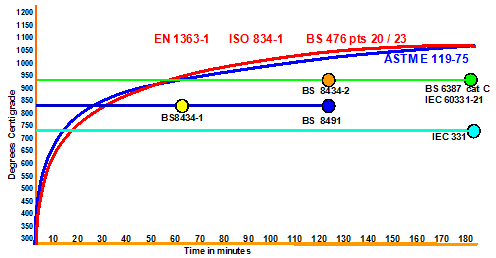 The Building Codes and Authorities having Jurisdiction (AHJ’s) say The Standard Time Temperature testing method is more or less the most important and required test procedure to substantiate fire resistance of building structures and systems including:

Are all fires the same?

Fires are NOT all the same. The different fuel sources, fuel quantities, differing environments, air flow/lack of flow affect the severity of fires. The Standard Time Temperature Curve is ideally suited to show results in domestic and commercial buildings. However, it is not the most select standard to use when it comes to fires involving industrial and petrochemical installs, offshore vessels, in tunnels and underground environments, as these can demonstrate much more severe circumstances.

MICC cables are environmentally inert having no toxic or hazardous materials so during installation, service life and disposal the cables have a zero environmental impact and are fully recyclable.

For a much more detailed report of this article as well as specific information regarding Hospitals/ Health Care Facilities, Road and Rail Tunnels and Nuclear & Conventional Power Industry, view the Fire Performance of Electric Cables (White Paper) document. (Available for download)